After an exciting two days as Prince Harry and Meghan visited Ireland, there are some memorable moments that will be remembered years down the road. Even though it’s a short trip they have managed to pack a lot in, making history here on Irish Soil.

Department of the Taoiseach

The Duke and Duchess first stop of the trip was to the Government Buildings, where they were welcomed by Taoiseach, Leo Varadkar.

The Taoiseach gave the Duke and Duchess a quick tour of the offices and led the couple up the ceremonial staircase. Mr. Varadkar pointed out the famous stained glass window called “My Four Green Fields”. The window was designed by artist Evie Hone in 1939. The window represents the four provinces of Ireland.

The Duke and Duchess admired the window. Prince Harry then asked, “Which one are you from?” Mr. Varadkar laughed and replied “Leinster of course. I’m a Dublin man.”

The Taoiseach then invited them to sign the visitors’ book. After some hesitation, Prince Harry signed and said “I never write big enough,” as he passed the pen. After Meghan signed the book as an official member of the Royal Family Prince Harry said: “You do it much nicer than me.”

Following the visitor book signing the Taoiseach, Duke and Duchess had a short 10-minute meeting behind closed doors.

It’s being reported that the Taoiseach and Prince Harry discussed the possibility of the Irish Defence forces participating in the Invictus Games, which gives the opportunity for wounded or injured armed service men and women to participate in sports events. 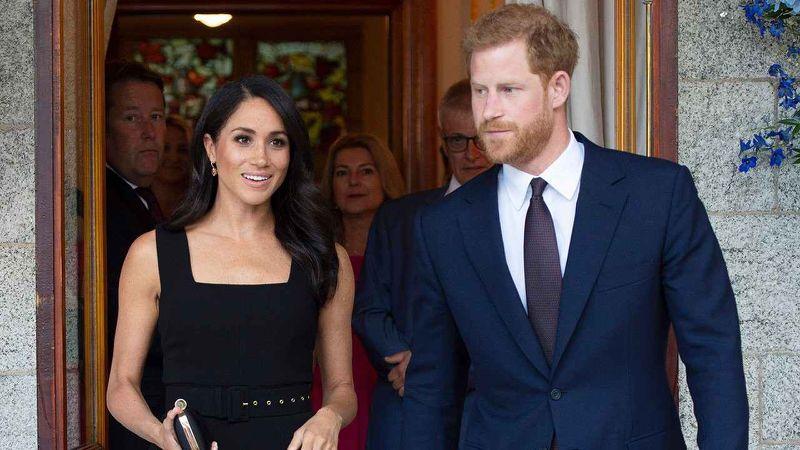 After visiting government buildings, Prince Harry and Meghan Markle continued their Irish visit with a summer party in Glencairn House where Prince Harry stood on stage and addressed the crowd of 300 people.

The Duke opened with “Tánaiste, Ambassador, a Dhaoine Uaisle,” followed by “I hope I said that right.”

He then followed up with –

“Standing here with you on this beautiful evening, it is easy to see why Ireland has such a special place in the hearts of my family and indeed, all those who come here.

“We’re so pleased to be here, for our first official international visit together as a married couple, and we hope it will be the first of many.

“Our relationship is of course informed by our history, but it is also one which is now dynamic and forward-looking,” he added.

“I have the greatest confidence that the friendship, collaboration and mutual understanding that our two countries have built up over the years will endure and it will grow.”

“I will finish by drawing on the words of President Higgins during his extraordinarily successful visit to the UK in 2014, which we still remember with admiration. He quoted the traditional Irish saying: ‘Ar scáth a chéile a mhaireann na daoine’ – “we live in each other’s shadows” – we shield each other, and rely on each other for shelter.

“That sentiment is as apt now as it was then, as we draw strength from one another as neighbours, partners, and above all friends.”

Brian O’Driscoll and Amy Huberman are among the excited guests waiting to meet Their Royal Highnesses #RoyalVisitIreland pic.twitter.com/2jB0o1ki6x

Writer and advocate Sinéad Burke also attended the party and had the chance to speak with Meghan.

I had the great privilege and pleasure of speaking with Her Royal Highness about the importance and power of fashion and the opportunities we’ve both been afforded by @OneYoungWorld.

On their second day here in Ireland, Prince Harry and Meghan Markle continued their visit by visiting Michael D. Higgins at Áras an Uachtaráin. They were given a quick tour around the grounds and then they signed the visitors’ book.

The Duke and Duchess then went on to ring the Peace Bell on the grounds of Áras an Uachtaráin. The bell was designed to make the 10th anniversary of the Belfast agreement.

The Royals then went on to visit Croke Park where they got a tour of the stadium’s museum where they were shown replica jerseys and original items from Bloody Sunday.

After the tour, they made their way onto the pitch for a demonstration of hurling, football and rounders skills.

They also got a chance to speak to some of Ireland’s top athletes such as Dublin ladies footballer Lyndsay Davey, Donegal footballer Michael Murphy and Galway hurler Joe Canning.

Trinity College to view the Book of Kells

After spending about an hour at Croke Park Prince Harry and Meghan continued their trip to Trinity College where the visited the Book of Kells. They were met by crowds inside the Trinity ground where the couple shook people’s hands and chatted with the fans. 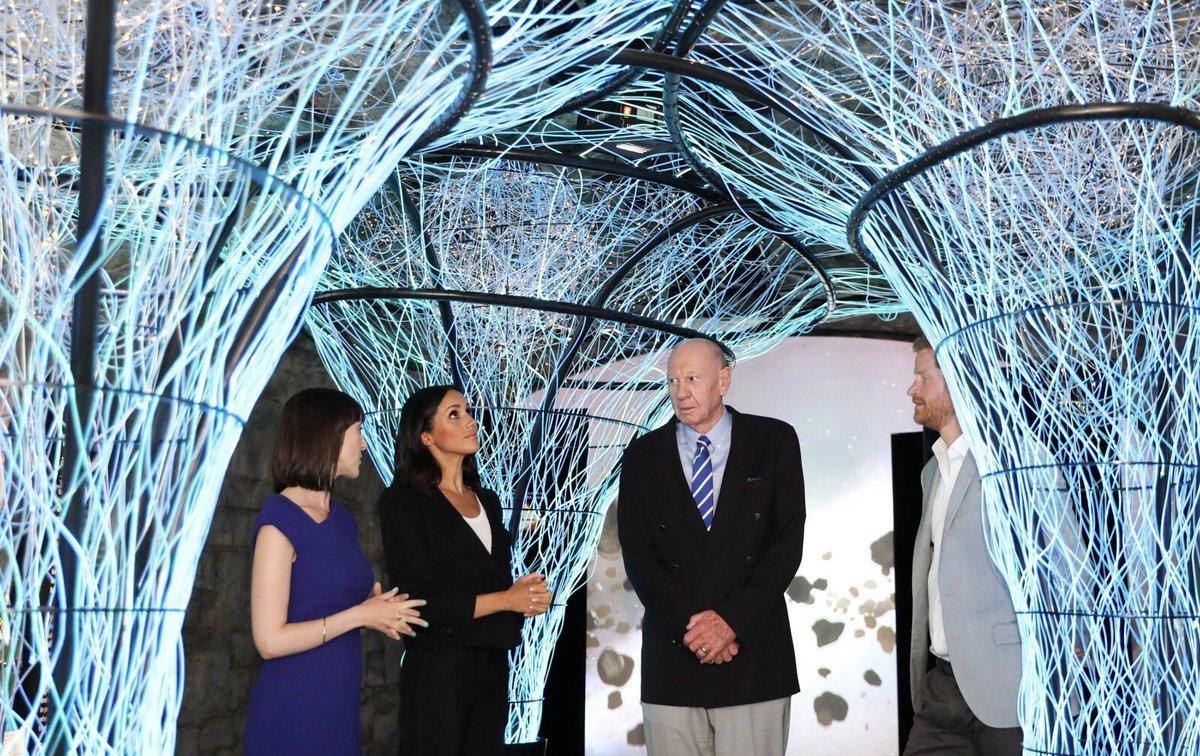 After their visit to Trinity, the couple then moved on to visit the EPIC Museum. The museum opened its doors two years ago. It tells the story of the 10 million people who’ve left the country over the last 1,500 years.

The museum includes over 300 stories of Irish emigrants in which 70 are still alive today.

Meghan Markle was impressed by the overall design of the museum, She also commented on how Irish people take pride in their heritage.

At the Famine Memorial – which commemorates the Great Famine of the 19th Century, The Duke and Duchess of Sussex meet its sculptor, Rowan Gillespie #RoyalVisitIreland pic.twitter.com/yQ23ffN81Y 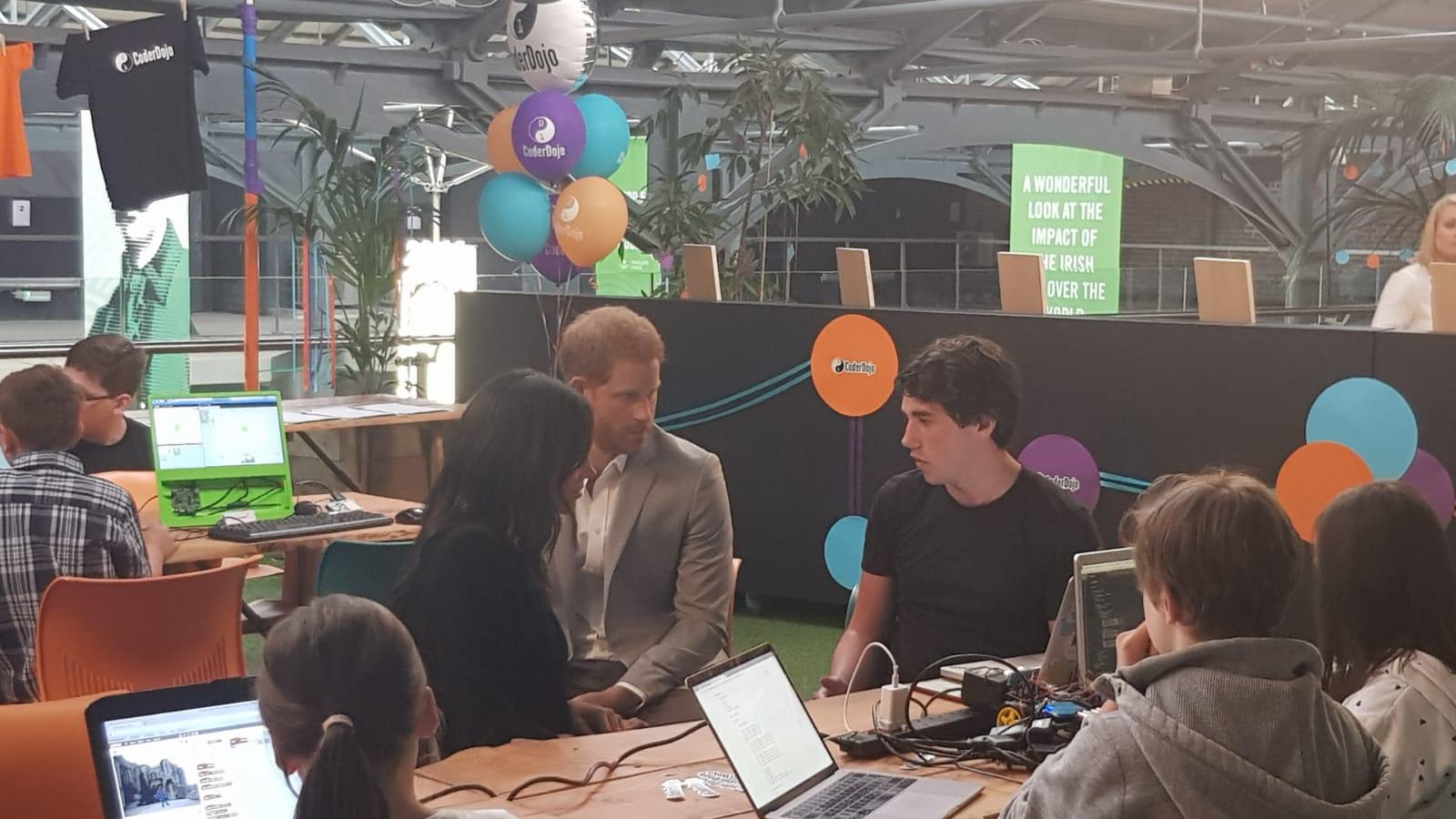 The Royal couple toured around the CoderDojo and Dogpatch Labs in Dublin’s CHQ yesterday afternoon to meet the young boys and girls being taught how to programme.

Prince Harry and Meghan spent a lot of time with kids asking about the projects their working on and showed genuine interest in their projects.

They visited the Coderdojo on its 7th birthday.

It was amazing celebrating our 7th birthday today. Well done in particular to all the young people who attended, those who shared what they were working on with the Duke & Duchess of Sussex, to their parents/guardians, & all the volunteers for their support thoughout the day!♥️ pic.twitter.com/G7MH0b1RsG

Trendster was honored to be invited by Kensington Palace to cover the event. Many more events to come stay tuned!

Get the best viral stories straight into your inbox!

Don’t miss out on new posts

Back to Top
Close

Your password reset link appears to be invalid or expired.

To use social login you have to agree with the storage and handling of your data by this website. %privacy_policy%